Ranjan was to host the special Holi edition of WPP Stream Asia in Jaipur. His flights were booked. However, he chose to fly to a different destination called Heaven. And I am sure he will be watching us from there, showering his love and blessings.

I have many memories of Ranjan but there is this special one that I want to share with all of you, dear streamers-
On a wintery afternoon in Jan 15 Ranjan called to check if it was ok for him to miss the team meeting scheduled for Wednesday afternoon in Jaipur, a few hours before Stream was going to open. I wasn’t comfortable but I was aware of his seniority and hesitatingly requested if he could come earlier.

He tells me, “Apoorva, I hate morning flights so will you give me a room for an additional night and promise me that we can have a drink together once I reach the hotel.”

That was Ranjan – the legendary adman to the world, a thorough gentleman and an endearing child to me.
You can’t be missed, for you will never be forgotten, Ranjan. RIP Always.

If you have a memory with Ranjan- please do share here. 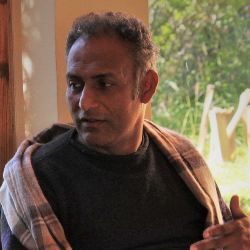 I was a minion (Senior Account Executive) in the same office as Ranjan Kapur, back in 1996. He was a bigshot. Our interactions were few and far between. The one thing that remains with me of his leadership was a gift. Everyone in the company received as a gift on O&M’s 50th birthday.The gift was a set of three Russian nesting dolls – one inside the other. In the smallest one was a scroll which read “If we hire people smaller than ourselves, we will be a company of dwarfs. And if we hire people bigger than ourselves, we will be a company of giants.” I have treasured that lesson ever since. From the giant himself.